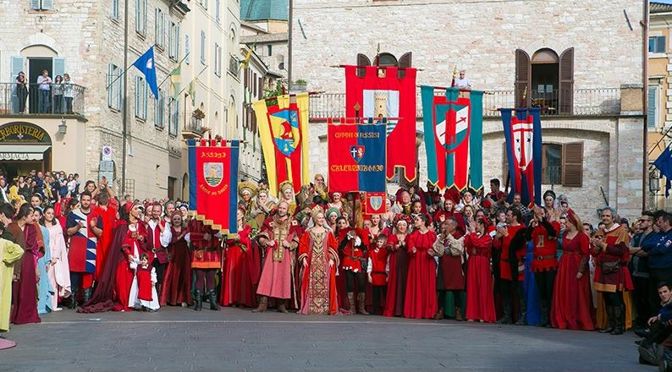 Middle Ages is the temporal container of the Calendimaggio, the feast that involves Assisi every year the first week of May.
The event revives passed traditions and customs:
– Pagan rites celebrating the return of spring and the renewal of the life’s cycle, popular in the ancient Umbrian people;
– Tradition of the “Songs of May”, compositions of dance poems and song in honor of the love and the rediscovered zest for life after the harsh winter, in use since the time of St. Francis;
– Rivalry between Nepis (Guelph) and Fiumi (Ghibellines), the two factions vying for power in Assisi between the fourteenth and sixteenth centuries.

Calendimaggio of Assisi remains today one of the few events that adhere strictly to medieval history; it is celebrated by the people of Assisi with an intense interest and it is not the usual event for tourists. Everything is focused on the friendly duel between local residents in the higher and the lower part of city. The Noble Parte de Sopra rivals against Magnificent Parte de Sotto, in the performance of recited medieval scenes, parades in costumes and musical exhibitions. The jury is composed by: a historian, a musicologist and a personality of the entertainment world, they decreed the faction that best has magnified the nascent Spring.

For some years, Calendimaggio will take place one day more than the traditional program. It starts on Wednesday afternoon with the Blessing of the banners, the only religious moment of a festival essentially profane. Each District has a church of reference: the Upper Part meets at the Cathedral of San Rufino and the Lower Part in the Basilica of San Francesco. Subsequently, the two factions parade through to the Piazza del Comune, where the Maestro de Campo receives the keys from the mayor and assuming the powers of the city; the Party which has won the previous year give back to him the Palio. The event continues with the reading of the announcements for challenge.

In the evening, the medieval “scenes” of the District that last year won Madonna Primavera come to life. In the respective zone of Assisi, the Party organizes its jump in the past. The City, lit by torches and richly decorated with flowers and flags, “evokes” a night of the Middle Ages with representations in the dialect of the time, shows and medieval music.

On the afternoon of Thursday the medieval games are held: tug of war, races of tregge (sledges), crossbow shooting. The Party that wins has the right to elect Madonna Primavera between five women of its faction. Each girl is combined with an archer; the best one decides the victory to the corresponding lady. In the evening it takes place the second part of acted scenes.

On Friday afternoon it gives space to the music with local groups and with the protagonists of festivals similar to Calendimaggio of Assisi. During the evening the scene pageants take place , ones that, in the editions of three days, were held the last evening.

Saturday is, then, the decisive day. In the afternoon there are the costume parades. Music accompanies each stage of the Calendimaggio and, in the evening, the culmination of the event it is the performance of the Chorus, in a crowded and silent Piazza del Comune (the singing challenge is brought forward by a few hours respect to the tradition). The two groups perform three songs of defiance each one, after that the jury retires to decide the verdict.

The Maestro de Campo announces the result and assigns the Palio, waving in the air a handkerchief of the Part that wins: blue for Parte de Sopra or red for Parte de Sotto, then the feast continues in the night.

Calendimaggio in Assisi this year will take place from 8 to 11 May, 2019. To attend the event we recommend some accommodation at the center or in the rural tourist area.