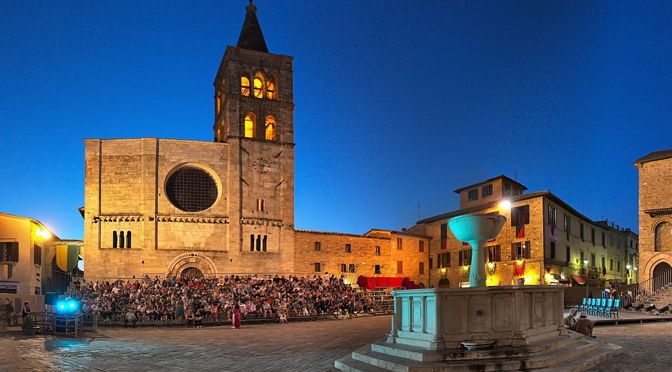 In late June, the tourists who choose to spend a holiday in Assisi and Subasio Park have as a destination unmissable the Gaite Market of Bevagna. The medieval village, a short distance from Assisi, is most famous for this event that involves the entire city for ten days.
With careful examination of the ancient Statute of the Commune of Bevagna (Mevania), it comes to life a historical reconstruction with unique characteristics.

The four districts, in which Bevagna was split (in the Middle Ages were called Gaite), challenge each other, playing the role that they covered in the Middle Ages and recreating, in detail and historical accuracy, the daily life of the thirteenth century.

Gaite bear the names of the four main churches of the ancient Bevagna: San Giovanni, Sancta Maria Filiorum Comitis, San Pietro and San Giorgio; the Palio della Vittoria is awarded on the last day at the end of four competitions: the market, the crafts, the gastronomy, the sports competition in archery.

Visitors to the village, during the Gaite Market, run through a fascinating journey into the past. The ancient crafts workshops return to medieval Bevagna, with techniques and tools for processing typical of the time: the painters, the mintmaster and the minting of coins, the blacksmith and the ars of bell, the ars cartaria and its large machines that reduce rags to a pulp to make paper filigree, the modeling of a stained glass, the dyer, the breeding of silkworms and the production of silk yarn through the wringer, the ars tabernariorum the panicoculorum et albergatorum, processing of wax, the production of parchment, the potter, the herbalist, the art of bricks, the workshops of wrought iron, wicker and hemp.

In the last weekend, the medieval market ends, in the best way, an event well cared for. The streets are crowded with characters in period costumes that live the daily life of 1200. Along the streets of downtown they are placed the market stalls. There are goods typical of the period: from fabrics to iron artefacts, from the candles of wax and tallow to various foodstuffs, even freshly cooked. Each gaita, to complete the magnificent picture of the market, sets up a tavern where you can taste the typical dishes of the medieval Umbria.

The sense of belonging to their gaita and the competitive spirit of Bevagna’s people help to improve the event year after year; the Gaite Market is today among the most important historical events and popular Umbria.

The Medieval Spring, spotlighting of Gaite Market, instead, will take place from 24 to 28 April 2019. In preview, the old crafts are reopened, offering, to tourists and visitors: days of culture, art, gastronomy, concerts and conferences related to the Middle Ages.