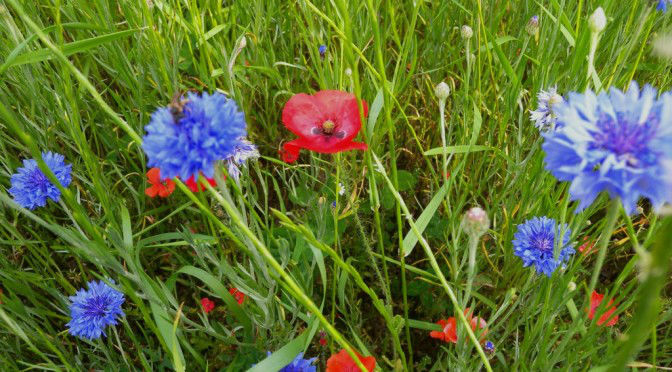 I do not know how many of you remember it, but I remind very well these strokes of blue in the fields in front of my grandparents’ house in Armenzano, now unfortunately we see many less, but I still find someone, perhaps near poppies. Let us find together the origins and secrets of this beautiful flower. Cornflower name probably comes from the French “fleur de lys” (flower of lily), the specific name is “Centaurea cyanus” where cyanus comes from greek “kyanos” (substance dark blue), referring to the predominant color of these flowers even if is not the only one.
Cyanus is also the name of a character in a greek myth: the goddess Flora falls in love with a young man named Cyanus; when she found him died in a field of cornflowers, she gave precisely to those flowers the name of his beloved.

Centaurea instead derives from the centaur Chiron, mild-tempered and wise he was considered, by the ancient, founder of the art of medicine and the legend has it that he it was saved by a pack of cornflower.

Another legend of this flower regards King Wilhelm I of Germany, in the time of Napoleon, he was forced to flee and, finding himself in a wheat field, he saw his mother braiding bunches of cornflower to pacify the children who were with her. Returned to the throne decided to put the cornflower in their heraldic frieze.

Characteristics and use of cornflower

I honestly don’t remember ever having seen cornflowers of different color from the intense blue, but in fact there are: white, pink, blue or burgundy.

It is a herbaceous plant of the Asteraceae family, and it is not only used to make beautiful our balcony or our garden, but also to decorate a simple plate of boiled potatoes and why not a plate of risotto!

We can also dry them and use them as herbal tea.

Wildflower marked by two layers of stems apex, the cornflower flower love the sun and it doesn’t suffer in a particular way the typical cold of the winter months. It’s, in fact, a herbaceous annual and perennial. It’s originated in Asia, North America and Europe. The fields of cereal is its ideal habitat. The multiplication of this plant is by seed, taking into account that both, autumn varieties and perennial varieties, can be planted and sown with the arrival of spring, although to get a more clear and lush flowering it’s better at the end of summer and then we have to protect them during the winter in a seedbed. Cornflower usually reaches a height of between twenty and ninety centimeters, and has a terofita scaposa biological form: this means that it is able to overcome the harsh climate of winter in the form of seed.

Narcissus between nature and myth

Infiorate of Spello – Corpus Christi between flowers and art