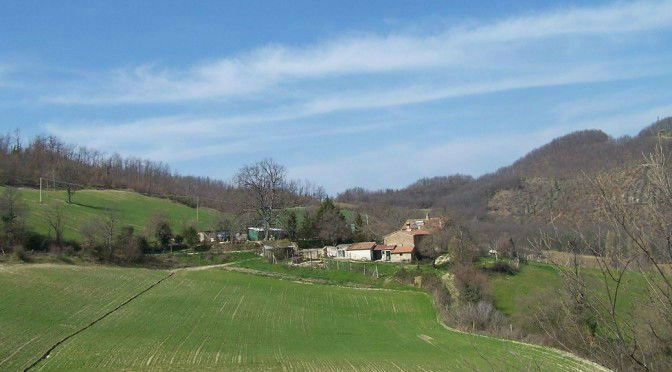 the house was probably built during the second half of the 1800, and since then nothing much had changed. 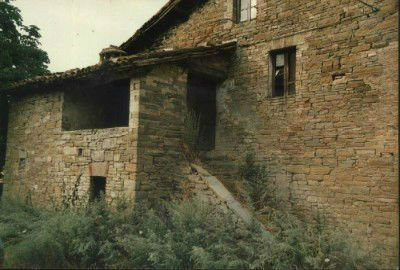 Before moving in, in fact, they had to undertake challenging renovation works: the roof needed to be redone, as well as floors, plasters, all windows and doors and the electrical system. The water system was made only by a sink in the kitchen, since there were no bathrooms, and the only way of heating the whole house was a simple wood-burning fireplace, which also drew badly and filled the room with smoke. To complete the picture, brambles and weeds appeared in every nook and cranny. The mission was worthy of a wild adventurer, but Elisabetta and Pierangelo immediatly got into the spirit, they called no construction company (there wasn’t enough money) and they began working to make the ruins habitable again. Fortunately they were not alone, and thanks to many friends willing and able, within a few months the house was fit for use, and we immediately settled. Of course it was not easy, especially the first few winters, when the newly installed water pipes froze and they had to use melted snow for drinking and cooking, but month after month, year after year they added something to make the house more comfortablle, a work that is still in progress!

The conquest of comfort

What now we take for granted, at that time wasn’t like it at all. In addition to the total lack of toilets, it was also missing a constant supply of drinking water (there was already a few meters deep well, but it only worked in winter), a heating system and a telephone connection, since the nearest public phone was in the village of San Giovanni di Spello, 7 kilometers away. 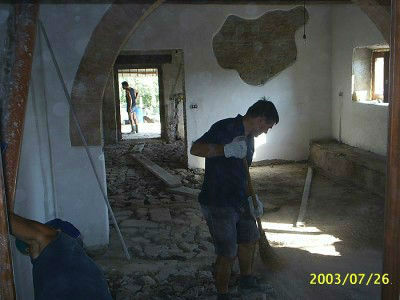 And the country house had been abandoned just for a few years! With a bit of good will, patience and hard work, slowly we managed to get to a suitable level of comfort. We now pump drinking water from the aqueduct, which fortunately passes within our farm, about 400 meters away from the house. The heating system has been improved gradually over the years, and currently consists of a wood-burning boiler that heats the radiators and produces hot water for sanitaries. For summer time, when the boiler remains off, we installed a solar panel with a 300 liters tank for hot water. The telephone line was brought here years ago, but only recently it has been enhanced to support an ADSL connection. Mobile phones work, but only with some providers, and not everywhere.

Along with the house my parents also bought an estate of approximately 60 hectares of fields and woods; my dad immediately began to cultivate grain and hay to feed a flock of thirty sheep and some goats. The following year, just at the beginning of the adventure, my brother Alessandro was born in one of the rooms of the house, and six years later, under a heavy snowfall in early January, my little sister Maria was born in the same room. The family grew, and with it grew the number of farm animals: besides the mentioned sheep and goats, and the ubiquitous chickens, a few years after we settled we started to breed cows in the barn on the ground floor of the farmhouse, with a Brunalpina named Carolona. In the next years the herd grew larger, reaching 10 cows with as many calves. 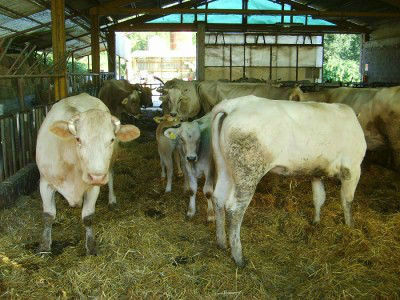 With the increase of animals, increased also the work to maintain them: in addition to the amount of hay to produce as a winter spare, was also needed the straw for bedding. In fact it was necessary to clean the barn from manure twice a day, a long and tiring work, all made by hand with a pitchfork and wheelbarrow. Being dairy cows (almost all Brunalpine), they had to be milked every day, and the milk was used by my mom to make cheese and ricotta, as well as for making our breakfast. In the early ’90s we begun to build a new barn, and since to save money most the work was carried out by my father and some willing friends, the works lasted a long time, so much that it was done only in the fall of 2000. Meanwhile, in the late ’90s, herds of wild boars started to appear in the woods around the farm and they began to cause serious damage to crops, as well as some wolves, placed presumably to stop the proliferation of wild boars, which immediatly preferred to plunder the defenseless sheep of the flock. The extent of the attacks was such as to force my father’s decision to sell the flock and devote himself to breeding cows and a few pigs. With the change of the barn it became impossible to milk the cows, and we gradually replaced the old Brunalpine with mestizo-brown Chianina, more suitable for the production of meat, fertilized by Chianina bulls grown on the farm.

How we have become …

The rooms on the ground floor, where once we had the old barn, have been renovated between 2001 and 2003 thanks to the work of a group of families from Venice, who also helped us strongly with other works in the farm. We now have a large well-equipped kitchen, a dining room that can fit up to 30 people, and a large living room with wooden floor. 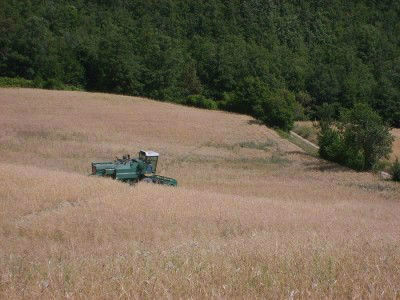 During recent years the farm has expanded its activities, thanks to my decision to carry on the job next to my parents. The last Chianina bull was replaced by a Simmental bull, bought at the age of 10 months and grown up within the herd. Now the farm has its own laboratory for the processing of beef and pork, and we sell both fresh meat, and stuffed and seasoned meat (like salami). The fields produce barley and field beans, used for feeding bullocks, and wheat, used to make flour. We recently started cultivating and selling  pearl barley, barley and chickpeas, and we are also experiencing other crops such as lentils.

And the brambles? Well, those are still there. They no longer grow in front of the stairs of the house, but they are not very far away, and must be kept constantly in check. They are so fast to grow back that if we just don’t cut them for a couple of years, they form inextricable bushes, but we have sickles, pruning knives, and brush cutters, and we’ll not give up!

Come to know us better

That ancient house in the woods at Armenzano of Assisi

Armenzano Emotions Under the Stars