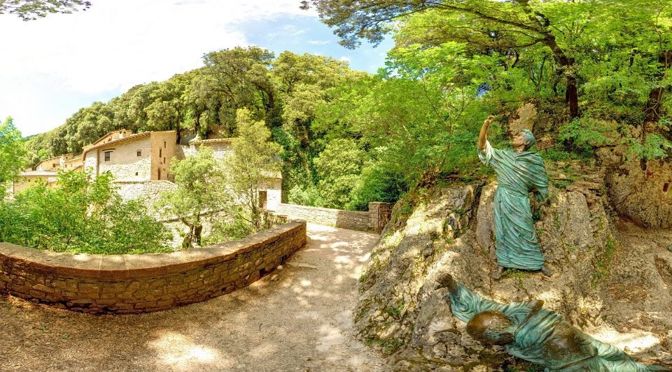 Trekking lovers get ready; today we’ll do the crossing of Mount Subasio from Assisi to Spello for the CAI (Italian Alpine Club) trails. The journey is long but not difficult and concentrates within it the best that Umbria has to offer: the historical and architectural wonders of two of the most beautiful medieval towns in the region, the Franciscan spirituality of the hermitages, the pristine nature, the landscape, and the traditions.

To complete the path, it is necessary a full day of walking (6-7 hours). On the foothills of Subasio, there is the possibility to divert along other routes, which reach the summit of Mount from the towns of: Costa Trex (Trail 61), Armenzano (Trail 55), San Giovanni (Trails 57, 58) and Collepino (Trail 52), so you can customize the destination or departure of your tour (all paths were renamed by adding a 3 in front of the old number). 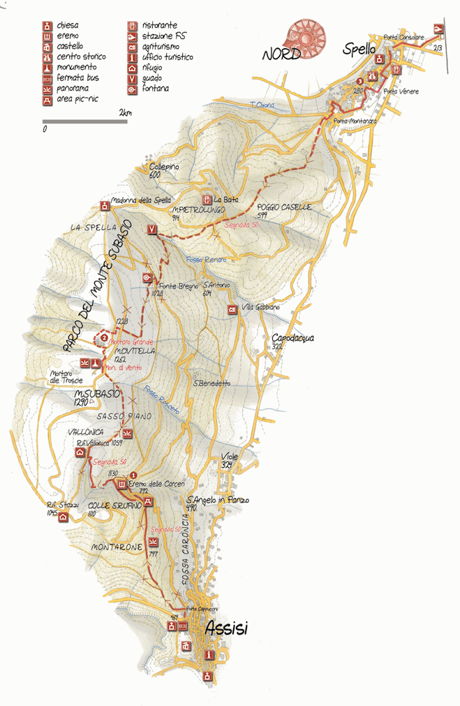 The road that connected the home of St. Francis and the country of Infiorata follow the Trail 50 of CAI, il Trail of Mortai.

It leave Assisi through Porta Cappuccini (469 m a.s.l.), you walk along an unpaved avenue of cypresses common, that runs along the medieval walls, and takes a steep climb. You go through the woods of holm and oaks; at a rest area, you have to reach the scenic route of Mount Subasio (SP 251). Follow the road down for 900 m up to Eremo delle Carceri, the Franciscan village-monastery which, through forests of oak and natural caves, it’s one of the loveliest spots of Assisi.

Going up the Fosso delle Carceri (often dry), in a path inside the woods, we come to the pastures and to the Refuge Vallonica (1050 m). In the fields under the refuge there are visible plants of lavender and rhubarb, part of medicinal herb experimental installations made by the Institute of Botany of Perugia.

The next stage is the rock formation of Sasso Piano (1125 m); you also could to vary along the Trail 60 and, surrounded by olive trees, to enjoy the breathtaking panorama of the Umbrian valley.

At Sasso Piano, the environment turns into a typical mountain landscape and it seems to be on an alpine peak. In spring is the ideal place to gather prataioli and turini mushrooms or to admire the expanses of fragrant flowers. The trail pass through the Fosso Rosceto until you reach the top of the Subasio and the refuge of Mortaro (1284 m) (or refuge of the Soldier), used as an aircraft observatory during World War II.

Continuing in the trail there are two deep sinkholes: Mortaro Piccolo (diameter 70 m, depth 20 m) and the Mortaro Grande (diameter 200 m, depth 40 m) with inside a beech wood. These spectacular natural caves were used in the past to produce ice, compressing the snow, and store it until the summer.

It continues on a slight slope and, then, down through a pasture arid, until Fonte Bregno (1028 m), the limit between the summit meadows and woods. Near that source there is a picnic area and a small shelter. After a little rest and refreshment you continue downhill, towards the Fosso Renaro, along a forest of hornbeam with Hungary maple and manna ash. Near the path 50, if you want, you get to Sasso di Botte, a small isolated rocky outcrop that breaks the continuity of the crown made of chestnut and hornbeam. Reached the Fosso Renaro (775 m), you come to the forest peak of Mount Pietrolungo.

We enter the last stretch of the road, passing some reforestation mixed coniferous and deciduous trees, we reach the hill of Poggio Caselle. In the flowering season our sense of smell is permeated by the smell of the broom. The trail is surrounded by the unmistakable yellow flower, juniper trees and honeysuckle; then the forest gives way to the olive trees that lead us, finally, to Fonte Bulgarella, outside Spello (313 m a.s.l.).

We suggest some structures to stay in the Subasio Park.